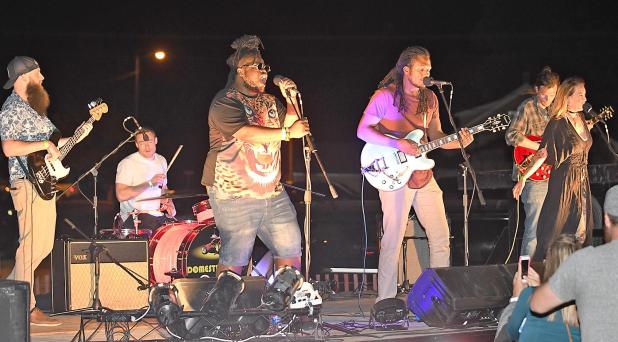 The music from Domestic Blend, Saturday’s headliner for the Rabble Mill/Hear Nebraska concert, showed why they got top billing. Unfortunately, an approaching storm cut their show short. (Johnson Publications photo) 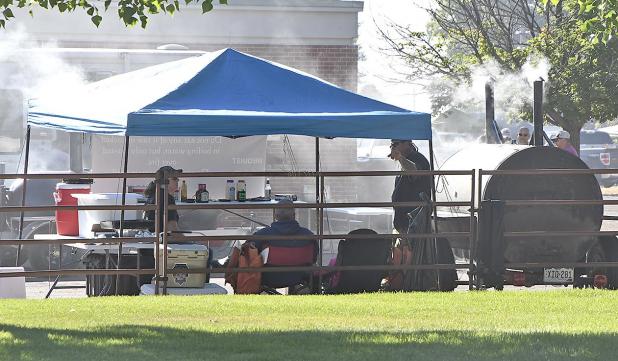 Early Saturday morning, the aromatic smoke from the BBQ cookers filled the area, as contestants finished up their pork, beef and chicken for judging that afternoon. (Johnson Publications photo) 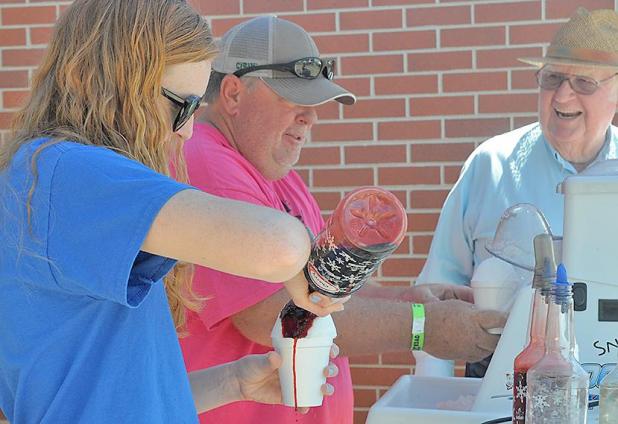 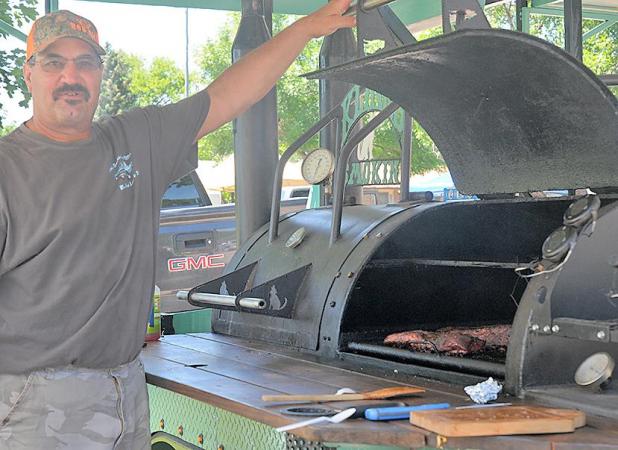 Editor’s note: See inside for more stories and photos from the Smokin’ on Broadway events.
Jan Schultz, The Imperial Republican

Smokin’ on Broadway began in 2016 with a simple idea of creating a barbecue contest in Imperial.
After another successful day of events Saturday, the coordinator of the third annual BBQ contest is thrilled with how the contest has remained central to the event.
Jack Schneider, who chairs the contest for the Chamber of Commerce, said experience and quality of the BBQ competition continue to grow.
“We had a lot more people who knew what they were doing this year,” Schneider said.
“I’m very pleased with the BBQ event and the camaraderie that is developing between the smokers.”
He said he’s already heard from two people who were here Saturday to observe the contest, and plan to enter next year for the first time.
There were five new contestants on Saturday, he said, as well as the six returners.
This year, 11 took part in the BBQ division with 11 also registered for the baked beans contest. Several did both.
Dave Klinkhammer of Kimball, who operates as Klink’s Smokin’ Yotee, repeated as the contest’s overall first place winner, and went home with the $750 cash top prize.
He also took first in the baked beans contest, and won another $100.
Schneider said Klinkhammer, who is also a caterer, is one of those who definitely knows what he’s doing.
“He’s an excellent cook and a really nice guy, too,” he said.
But, Schneider noted that Klinkhammer didn’t win by a big point spread. It was close.
In fact, in the four divisions that included brisket, pulled pork, chicken and pork ribs, Klinkhammer took second only in brisket.
Several smokers went home with cash prizes for first and second in the four divisions, spreading out the winnings.
Schnieder said that’s good to see, and shows how the competition is growing.
For each of the four divisions, judges stopped at each of the 11 smokers for taste-testing, then ranked that individual from 1-10 taking into consideration appearance, aroma, tenderness and flavor.
Scores were added up for the four divisional first and second place winners, doing the same with all four scores for the overall first and second.
Second place overall winners behind Klinkhammer were Marc Brown and Todd Pankonin of Benkelman, who competed as Bald Butts BBQ.
In each of the individual BBQ meat divisions, first and second place took home $100 and $50.
Beans were judged in a similar manner, with first and second winners also earning $100 and $50.
Thirteen different judges were used in the BBQ and beans judging.
After the judging was completed, people were able to taste samples of the smokers’ meat and beans. Despite the heat, a good number turned out for the taste-testing.
Schneider only sees the BBQ contest as getting better in the coming years.
He said a lot of it has to do with the smokers themselves.
“Everyone gets along so well. It’s one big group of folks who know what they’re doing and enjoy the relationships they developed with the other smokers,” he said.
Smokin’ attendance
Chamber committee member Chris Lee said attendance throughout the day reached 1,100, based on arm band distribution.

To read more on Smokin' on Broadway events and other stories, please log in or subscribe to the digital edition. https://etypeservices.com/Imperial%20RepublicanID359/