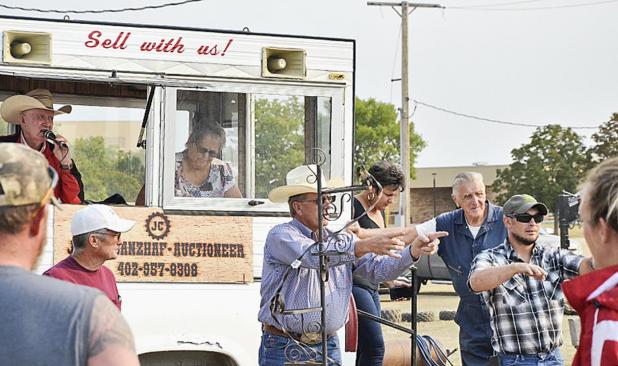 Becky Kuntzelman | Johnson Publications
Ringmen at Monday’s auction try to keep up on the bidding, as the auctioneer, in trailer, manages the offers on each item. 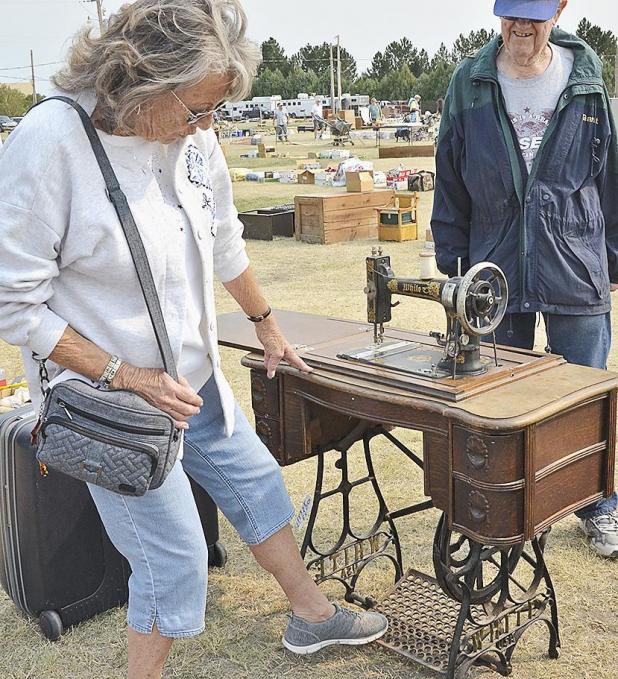 Becky Kuntzelman | Johnson Publications
Sharon Russell admires an antique treadle sewing machine that reminded her of the one her mother taught her to sew on. Tom Russell looks on. 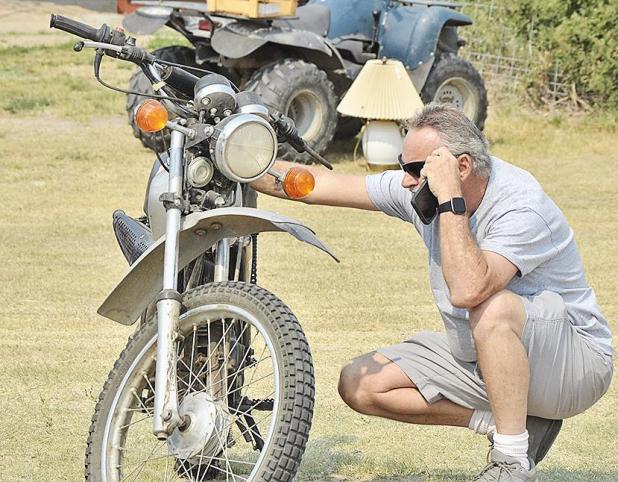 The Labor Day auction—40 years and still going strong.
As in years past, the auction was kicked off at 8 a.m. with the usual introductions.
“I would say there 14-18 auctioneers in attendance with two or three in four rings going most of the day,” said Karen Fanning, co-owner of Fanning Auction.
They came from all over Nebraska, Colorado and Kansas to help with the auction.
There were many great items and antiques that sold really well with many items coming from estate sales, said Fanning.
“It was a beautiful day. We couldn’t have asked for better weather,” she said.
There were people attending the auction from Nebraska, Kansas, Iowa, Colorado, California, South Dakota, Texas and Wyoming, Fanning said.
“We were worried about crowd attendance because of COVID-19. But we were happily surprised that attendance was about the same and maybe more since there was no state fair,” she said.
Fanning said they had well over 800 bidders.
Registration for items was cut off in August because there was so much being listed, she said.
“We always have items registered ahead of time for the following year’s auction,” she added.
She said they finished up around 8 p.m., which was surprising considering the size of the auction.
Due to COVID-19, the Fannings reviewed safety measures before the bidding began.
“We asked that everyone attending observe social distancing, and if anyone was sick they should not attend. We supplied hand sanitizers in numerous locations around the auction area and had masks available for anyone who wanted them,” Fanning said.
Some attendees wore masks and others did not.
Cashiers were stationed in the kitchen behind one big window as a “distance” safety barrier, unlike past years where they were placed at tables in the open in close proximity to the crowds, she said.
Forty years strong
Fanning said the auctions got their start in 1980 in the parking lot of Daylight Donuts (now MorningStar Cafe).
“We always had monthly miscellaneous sales plus a Labor Day auction,” she said.
Soon, the auction spread over into the grocery store parking lot (now Imperial Super Foods).
“As it got bigger, we got permission to close the side street next to Daylight Donuts to accommodate people to park campers,”Fanning said.
After the original expo building was built at the fairgrounds, the monthly sales and Labor Day auction moved to that building and the parking lot surrounding it, she said.
“I think it was probably around ‘94 or ‘95 that we discontinued the monthly sales and started pushing just the Labor Day auction,” said Fanning.