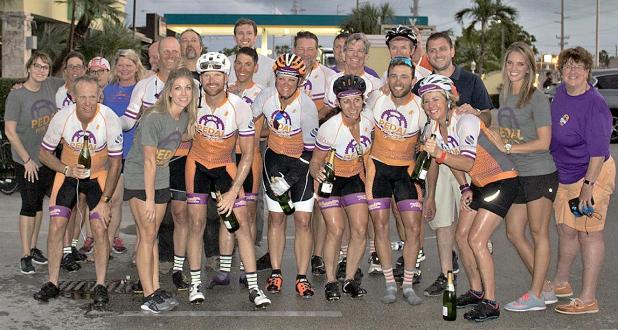 The riders and support staff capped off the ride in Key Largo, Fla., with a champagne celebration to mark their achievement. (Courtesy photo—Pat Summit Foundation) 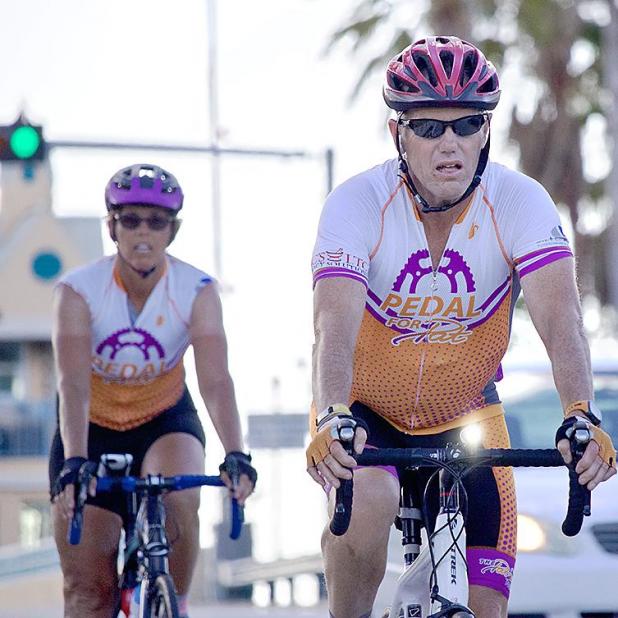 Mark Bottom of Imperial was one of eight riders completing a 1,098-mile, 11-day ride to raise money for the Pat Summitt Foundation and its work with Alzheimer’s Disease. (Courtesy photo—Pat Summit Foundation)

‘Pedal for Pat’ a lesson in teamwork, camaraderie

Imperial’s Mark Bottom paused to think when asked to name the highlight of his 11-day, 1,098-mile bike ride as member of the Pedal for Pat team.
While there were many highlights, Bottom spotlighted how  the eight riders and their support team bonded and came together during the trip.
“By day two, you’d have thought we had been together for months,” Bottom said.
One of the riders, Michelle Brooke-Marciniak, played for Pat Summit’s Tennessee Lady Volunteers.
She was a member of the Vols’ 1996 national championship team and was the MVP for  the Final Four. In addition, she played in the WNBA.
Even with those experiences, she told Bottom this was the best team event she’s ever been involved with.
Despite varying bicycling experience among the riders, including a pair of professional riders, he said the group rode together.
Depending on the width of the highway or street, they rode single file or side by side and stuck together as a group.
The “Pedal for Pat” event raised funds to benefit The Pat Summitt Foundation and its mission to support research and education on Alzheimer’s disease.
The 1,098-mile trip matches Summitt’s 1,098 wins as legendary coach of the University of Tennessee Lady Volunteer basketball team.
Her career was cut short by a five-year battle with Alzheimer’s that claimed her life in June 2016.
Bottom said it was special to be a part of the inaugural event. Each rider had to raise $10,000 in order to participate, as well as be in good physical shape to complete the ride.
Right now, Bottom has raised $16,000 with some money still coming in. Overall, the effort raised more than $200,000 for the foundation, which far exceeded their expectations for the first-ever event.
Bottom praised the Imperial community for its support of both him and the Pat Summit Foundation. He said most of the money he raised came from the community and family.
With most of the riders coming from big cities, “they were all in awe of the local support” and the way the community and school rallied behind him, he said.
Eleven-day, 1,098-mile ride
Originally, the ride was planned for 12 days, ending in Key Largo, Fla. However, the weather forecast for the final day didn’t look good, due to a tropical storm predicted.