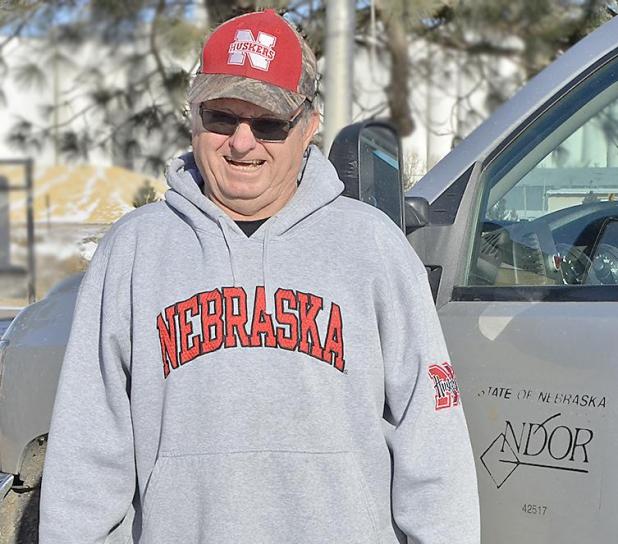 Ray Walrod, highway maintenance superintendent, is retiring from the Nebraska Department of Transportation for this area after 45 years. Wednesday this week was his last day. (Johnson Publications photo)

Ray Walrod, highway maintenance superintendant, retired from the Nebraska Department of Transportation after 45 years, or as he put it, “44 years, five months and 25 days.”
Walrod began working at the Nebraska Department of Roads in 1973 as a maintenance worker. From there, he moved up to crew chief, supervisor, and for the last 23 years, superintendent.
The Department of Roads changed its name on July 1, 2017 to Nebraska Department of Transportation.
“I applied there to get better pay and good benefits,” he said.
His starting pay was $2.10 an hour and gas was 35 cents a gallon at that time, he laughed.
Walrod said he has had the privilege of being a part of several memorable opportunities and honors during his time with the state.
About 10 years ago, he was one of a number of members from across Nebraska selected to serve on the Awards and Recognition Agency Panel. Their mission was to honor workers who lost their lives during the course of their jobs  with the Department of Transportation.
“It was a very interesting and challenging job in which we had the opportunity to work with the governor’s office,” Walrod said.
The memorials are large boulders, dedicated to the workers in each of eight districts and placed in each of those districts across Nebraska. Many are located along roadways, especially near rest areas on interstates.
The memorial boulder for this district is located in McCook at the Department of Transportation district office.
“A lot of things come and go, but those memorials will always be there,” he said.
Walrod said he has also been on the district safety committee for the last five years and was honored to be named manager of the year in 2016.
Since becoming the superintendent, he said he has basically been on call for 23 years.
“It has been a good job, good career, with unique challenges,” he said.
Walrod’s area of responsibility has been Chase, Perkins, Grant, Dundy and Hayes Counties and parts of Hitchcock. He said  he has been superintendent over the Grant, Imperial, Benkelman and Palisade shops.
Walrod said he has enjoyed meeting a lot of people in all the towns and counties.