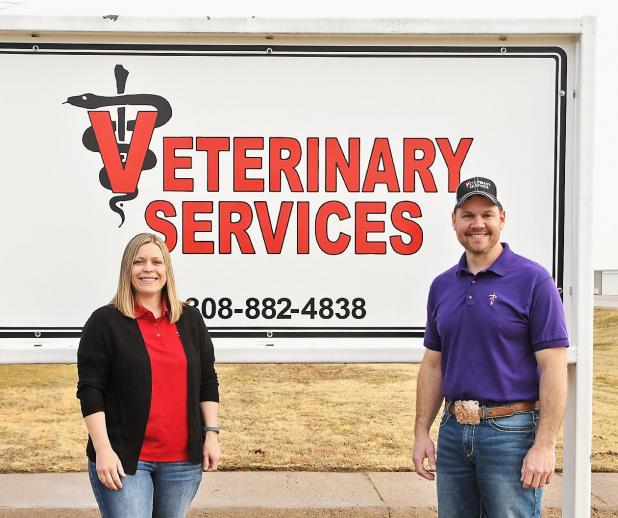 Dr. Nicole Hendricks, left, recently bought Dr. Dave Johnsen’s half of Veterinary Services in Imperial. The business is now owned by Hendricks and Dr. Troy Worth.

Editor’s note: The Imperial Chamber of Commerce selects a Business of the Month, which will be identified that month with a banner. Selection is made at the monthly Chamber meetings, and this newspaper is featuring a story on that business each month.
Megan Kelley, The Imperial Republican

Veterinary Services was opened in Imperial in 1981 by then partners Dr. Dave Johnsen and Dr. Lex Thompson.

The group grew to serve both the agricultural vet side of Chase County, as well as small animals.

Located at 1041 NE-61 in Imperial, a large animal building and new office building were constructed in 2013.

Two additional doctors were hired since then, including Dr. Nicole Hendricks and Dr. Jake Johnson.

Jake Johnson, Hendricks and Worth all hold their Doctor of Veterinary Medicine (DVM) degrees from Iowa State University (ISU).

Vet Services is closed on Sundays.

After more than 30 years as a partner in Vet Services in Imperial—and 38 years in veterinary medicine—Johnsen and wife Monica retired at the end of 2019.

Hendricks, who has been with Vet Services since 2016, recently bought Johnsen’s half of the practice.

Hendricks, who grew up north of Madrid, joined the practice in 2016 after working as a small animal vet in Kearney.

Hendricks and Worth were classmates at ISU for their DVM degrees.

Worth received his undergraduate degree from Hastings College, while Hendricks went to the University of Nebraska-Lincoln (UNL).

Nebraska doesn’t have a DVM program, Hendricks said, which is how Worth and Hendricks ended up at ISU.

Nebraska and ISU do contract positions for their DVM program, offering 25 spots each year.

“Basically the agreement is  Nebraska gets in-state tuition for those students for those contract positions,” Hendricks said.

Hendricks’ DVM is in small animals, but she’s been doing more work with cattle, especially during calving season.

“I’m trying to learn a lot of the large animal emergencies,” Hendricks said. “That’s kind of been the goal this spring is to get me into everything.”

Recently, Worth was in the middle of a C-section when there was another emergency, so Hendricks stepped in and finished the C-section.

She also worked on exotic animals while in Kearney, in addition to dogs and cats.

“I still do that here,” she said. “Anything from guinea pigs, rabbits and even pot-belly pigs.”

Hendricks’ husband, Chad, owns Hendricks Flying Service out of Grant, where he does aerial application.

The couple has two boys, Clay and Lane.

The other half of the new partnership, Worth, is from Kenesaw, but his wife, Angie, has family in the area.

The Worths have three children, Hayden, Hadley and Henley.