Co-hosts for the Cattlemen’s Ball shared some words on stage, from left, Allison and Derek Sandman and Chris and Wayne Krausnick. (Cattlemen’s Ball of Nebraska photo by Steve Towery) 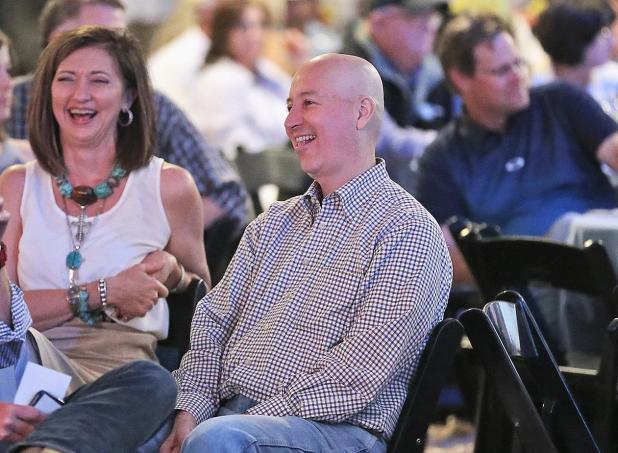 Organizers have no beef with 2019 Ball

Allison Sandman used a distinctly non-ranching related metaphor to describe the 2019 Cattlemen’s Ball of Nebraska.
“Bottom line, we knocked it out of the park,” Sandman, one of the event’s hosts and main organizers, said.
While numbers are not yet exact, Sandman said about 2,900 people attended the event, held Friday and Saturday on the Wayne and Chris Krausnick Ranch near Wauneta. That attendance was about what organizers expected, she said.
“I’m getting some extremely positive comments,” she said. “What I’m getting a lot was, ‘The ball was not what I expected.’ Everyone has been so kind in their comments.”
She said the art and history tents went over well, and volunteers in the health and wellness tent were happy with attendance there.
The event went off with virtually no major hiccups. The closest thing to a problem came around the time of Saturday’s banquet, when winds caused a brief dust storm, followed by a fierce 15-minute rainstorm that left mud puddles on the ball grounds.
But by that time, most other events at the ball had ended and people already were in the main tent for a program, steak dinner and concert, or in the nearby saloon tent having a pre-dinner drink.
Sandman and other ball officials gave high marks to the volunteers they relied on to operate the event. They still were appealing for volunteers days before the Ball, but by the time of setup and the actual event itself, there were enough. Volunteer numbers were aided by some specific groups, like the McCook’s Work Ethic Camp, which sent 10 inmates, and large contingents of students from area schools, including Wauneta-Palisade Schools.