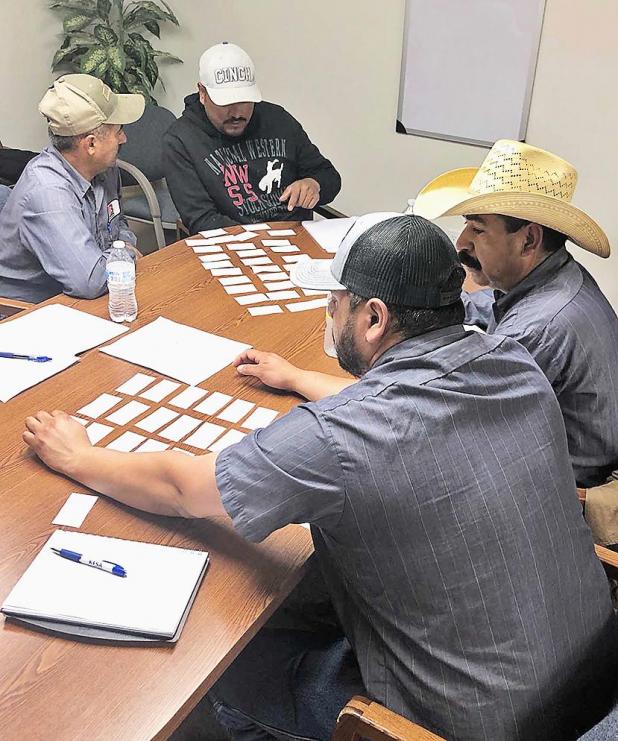 Students in Kara Hagan’s English as a Second Language class at Imperial Beef use cards with nouns, verbs and adjectives to create sentences. (Courtesy photo)

A new partnership between the Mid-Plains Community College Imperial campus and a feedlot north of town is improving communication skills.
Kara Hagan is an English as a Second Language (ESL) instructor for MPCC. She’s started a new program that’s making it easier for Spanish-speaking employees at Imperial Beef to learn English.
“We’re seeing crazy success,” said Hagan. “So far, we have 29 students registered, and the class just began in April.”
Hagan isn’t new to ESL. In college, she worked in the University of Nebraska-Lincoln Writing Center tutoring ESL students. She also taught ESL classes at the Lincoln County Detention Center in North Platte before relocating to Imperial. She’s excited to be able to put her experience into practice.
There’s such a need for ESL,” said Hagan.
“It’s really important to me that everyone be able to effectively communicate. Anyone who is a non-native English speaker still has a basic need and desire to want to fit in and be part of a social circle of some sort, and the way that is accomplished is by communicating. Students are in my classes because they want to learn a new language. They don’t want to be different,” she said.
ESL students at Imperial Beef learn how to spell words by playing Hangman.
She got the idea for the partnership with Imperial Beef after teaching an ESL night class at the Imperial campus for spouses of Imperial Beef employees.
“Their husbands couldn’t commit to the time the class was offered because they were working,” said Hagan. “So, I thought, ‘What if I go to them instead?’”
Located approximately 13 miles north of Imperial, Imperial Beef is a nationally-recognized and established cattle feed yard. About two-thirds of its employees are primarily Spanish-speaking.