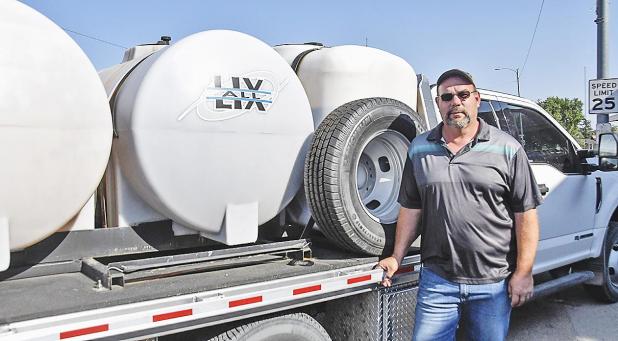 Jan Schultz | Johnson Publications
Brian Helser of Champion will soon have signage on his truck that identifies his new business, Southwest Liquid Feeds.

After three years as a sub-dealer for Midwest Liquid Feeds, Brian Helser of Champion is venturing out on his own.
On the first of this month, Helser began his own operation, Southwest Liquid Feeds, providing a full all-encompassing service to area cattle operations.
He is now one of just three dealers for Midwest Liquid Feeds in Nebraska.
Helser said a desire to get back to his roots is one reason he started this business.
“I grew up on ranches in southeast Wyoming and wanted to get into the livestock industry,” he said.
It’s also a goal to get large enough so son Trace can join the business someday, he said. The younger Helser works in farming in the area.
Southwest Liquid Feeds provides the Allix feed supplement, which contains all the feed cattle need, he said, including protein, minerals, vitamins and fat.
It’s full service business, he added. He will place the troughs at the ranch, check them weekly and refill as needed. If the cattle are moved to a field of stalks, Helser will move the troughs as needed.
His business can also provide other needs for the cattleman, including salt, dry minerals and protein tubs. He’ll add garlic to the feed in summer if requested for fly control, he said.
He can also be contacted for other products to help during calving season such as pastes for newborns.
Helser said liquid feed such as his has mostly been a winter product in the past, but cattle operators are now seeing the benefits of using it in late fall and beyond.
Besides Chase County, his service area as a former sub-dealer took him to Dundy and Perkins counties, too. He’ll continue to make contacts in those areas with an eye on expanding.
In addition to other “jobs,” Helser also maintains a herd of 25 cows in his own operation. Son Trace is also involved in the cattle business, and serves on the national Junior Chianina Board of Directors for a second two-year term.
Helser and wife Tammy live on a small acreage in rural Champion, where his new business is headquartered.
He can be contacted for more information at 308-882-8060.