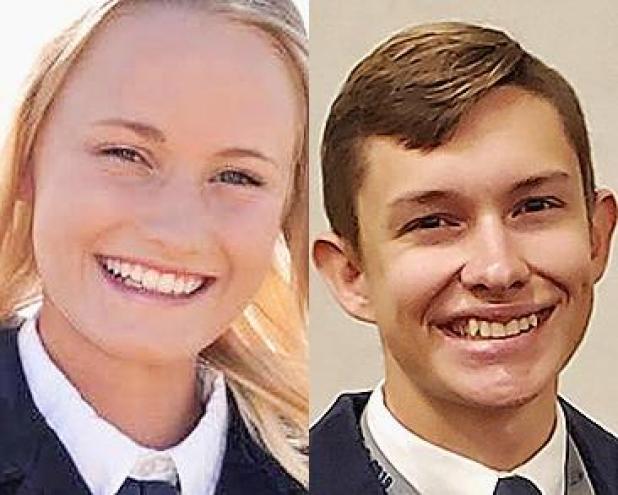 It’s been a big year for CCS senior Jozie Schilke.
Last week, Nebraska FFA announced via Facebook live who the new state officers were.
Schilke made the cut last Thursday, and was named one of five vice presidents.
“Being selected via Facebook was definitely different,” Schilke said. “I was actually in the tractor planting corn when they announced it.
“I had stopped at the end and my mom and dad climbed in to watch it with me,” she added. “So it was nice being able to be right beside my parents when I found out.”
One downfall of not having the announcement at the state convention is missing being in front of the entire Nebraska FFA delegation.
“I did miss not being able to be with the rest of the other candidates or even seeing some of my friends right after,” Schilke said, “but it was still a cool experience.”
The four other vice presidents include Jakob Anderjaska of Hayes Center, Alyssa Moser of O’Neill, Heath Keiser of Gothenburg and Rebecca Wulf of Logan View.
“It’s neat to have two from the southwest district,” said Hayes Center FFA Advisor Randy Vlasin.
“Then you throw the Gothenburg kid in there,” Imperial Advisor Jason Speck said.
Both area advisors are excited not just for Schilke and Anderjaska, but for the team as a whole.
Taking the two other slots were Secretary Hannah Moseman of Oakland-Craig and President Madison Stracke of Stuart.
The entire process was different this year due to COVID-19. All candidates participated in a first round of interviews in January.
Finalists were announced from the preliminary interviews. Normally, those finalists would have moved on to another round of interviews at state convention.
With state convention canceled, “they ended up determining the officers based on the preliminary interviews,” Speck said.
Vlasin, who has been involved in FFA for awhile, feels bad for both the outgoing and incoming officer teams.
“The current state officers don’t get to do their final hurrah in front of the state convention,” Vlasin said. “I feel bad for those kids because they put a lot of work into this.
“Then I feel bad for this year’s group because there’s that rush of excitement at state convention in front of everybody and you get to meet who’s going to be on your team right away that day,” he added.
However, the group who made the cut have been in contact ever since they found out they were finalists.
“I know they’ve been on group chats with each other quite a bit, so it’s not like they’re complete strangers,” Vlasin said.
Also because of the coronavirus, this new group of officers will not have a normal year.
“Right now they should be planning for COLT conference,” Speck said.
COLT stands for Chapter Officer Leadership Training. In different sessions, the chapter officer teams attend leadership training led by the state officers.
Speck said COLT has been canceled.
“Hopefully they’ll be able to get together to be like face to face,” he added. “I’m not sure what’s going to happen.”
“As of right now,” Schilke said, “there are not any major plans set in place” for upcoming FFA events.
The officers have online training via Zoom starting next week. Training and meetings will remain on Zoom until the end of May.
“Once June comes around, rescheduling will probably begin,” Schilke said.