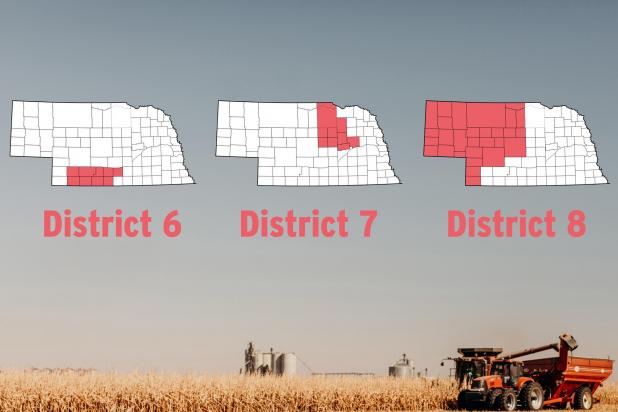 Terms for three members of the Nebraska Corn Development, Utilization and Marketing Board, also known as the Corn Board, will expire June 30, and Nebraska’s corn checkoff program is seeking candidates to petition for those districts.
The open positions represent Districts 6, 7 and 8. District 8 includes Chase County.
District 8—Counties of Sioux, Dawes, Box Butte, Sheridan, Scotts Bluff, Banner, Kimball, Morrill, Cheyenne, Garden, Deuel, Cherry, Keya Paha, Brown, Rock, Grant, Hooker, Thomas, Blaine, Loup, Arthur, McPherson, Logan, Custer, Keith, Lincoln, Perkins, Chase and Dundy.
Andy Groskopf, current District 8 director, has indicated that he will pursue reelection.
District 6—Counties of Hayes, Frontier, Gosper, Phelps, Kearney, Hitchcock, Red Willow, Furnas and Harlan.
Ted Schrock, current District 6 director, has indicated he will pursue reappointment.
District 7 in the northeast part of the state also has an opening.
Board appointments are made by the Governor. Candidates seeking appointment may place their name on the list by filing a petition with the Nebraska Corn Board.
Qualified candidates include individuals who are citizens of Nebraska, are at least 21 years old, have been actively engaged in growing corn in Nebraska for five years and derive a substantial portion of their income from growing corn.
Petitions can be obtained by writing the Nebraska Corn Board (P.O. Box 95107, Lincoln, NE 68509-5107), by calling 800-632-6761 or emailing nikki.bentzinger@nebraska.gov.
A candidacy petition must carry the signatures of at least 50 corn producers from that district. All petitions must be received by the Corn Board no later than 5 p.m. CT on Friday, May 21, 2021.
Faxed copies do not qualify.
The Nebraska Corn Board is funded through a producer checkoff investment of a one-half-cent-per-bushel checkoff on all corn marketed in the state and is managed by nine farmer directors. Its mission is to promote the value of corn by creating opportunities.