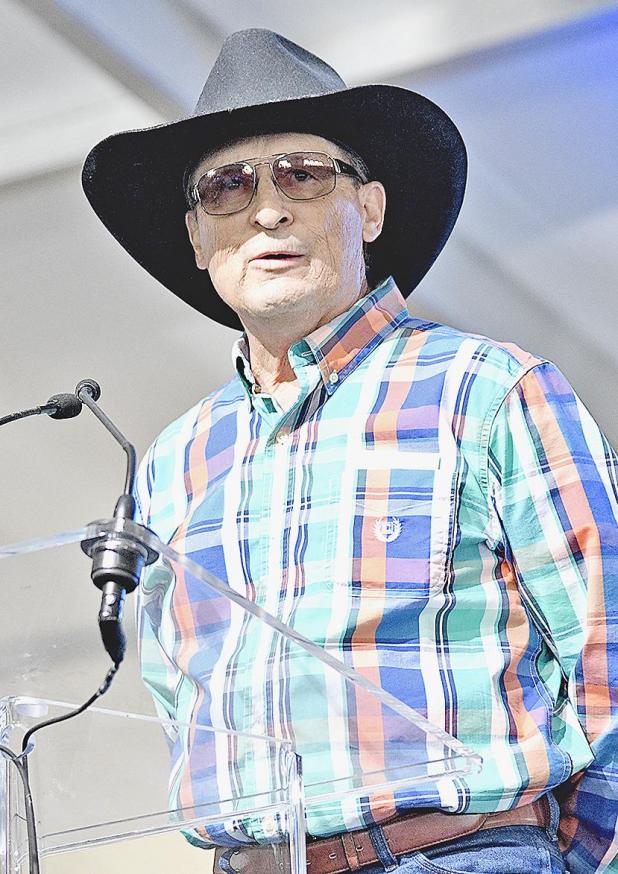 Lex Thompson of Imperial spoke of his cancer journey at the Cattlemen’s Ball, offering both practical advice and a testimony of his faith.

Cancer a grim family tradition for some

■ Editor’s note: This is one in a series of stories on cancer survivors who were part of the 2019 Cattlemen’s Ball of Nebraska held June 7 and 8 near Wauneta.
Tom Pantera, The Wauneta Breeze

Cancer doesn’t necessarily run in families, even if it can sometimes seem like it.

According to the American Cancer Society’s website, “Cancer is such a common disease that it is no surprise that many families have at least a few members who have had cancer. Sometimes, certain types of cancer seem to run in some families. But only a small portion of all cancers are inherited.”
Still, for some people, like Lex Thompson of Imperial, it can begin to seem like a family tradition.
Thompson, 70, has seen cancer strike at least four blood relatives.
And that was before he was diagnosed in August 2014 with multiple myeloma, a cancer of the blood that affects the immune system.
His father and brother both are survivors of prostate cancer. His father is 94 and in remission and his brother is undergoing successful treatment since his diagnosis last year. A cousin on his mother’s side died of pancreatic cancer in 2007 and another cousin on his mother’s side died from cancer — he can’t remember what kind — about 15 years ago.
It’s also struck some people in his family not related by blood. His wife’s oldest son died of lung cancer in 2008, and a brother-in-law died of the same disease in 2014.
Thompson’s own diagnosis came after a routine screening. He had not been feeling any symptoms.
“I’ve always done the Health Fair in Imperial,” he said. “There was a slight elevation of what’s called serum protein about a year previous to my diagnosis.”
He received the actual diagnosis after a recommended visit with his regular doctor.
While he was aware of cancer in his family, it wasn’t something that preyed on his mind.
“Knowing that my father had prostate cancer, periodically [I thought] well, you know, that could happen to me,” he said.
But after the diagnosis, he was going through his family history with the doctor and “we started talking about it. Golly, that’s a lot of cancer, isn’t it, on both sides of my family?” He added that it has mostly struck male relatives.
While he has not spoken much with his relatives about how they got through the disease, those cases have taught him some lessons he’s used in his own fight.