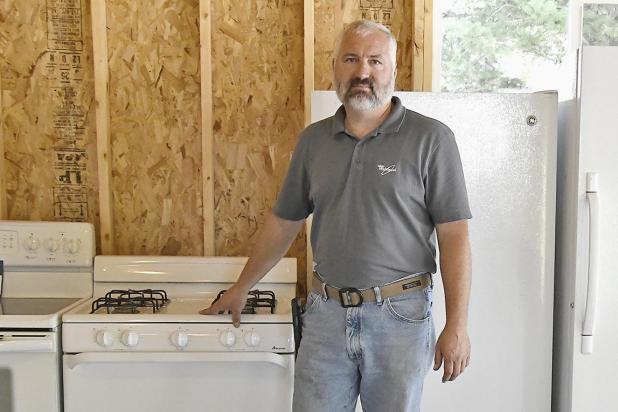 Dallas Baney has 25 years of experience in the selling and repairing world of appliances. He and his wife moved to  Champion from Loveland, Colo. (Johnson Publications photo)

Baney’s Appliance, owned and operated by Dallas Baney, is officially open for business.
Baney is licensed and insured to both repair and sell Crosley Appliances, a company that sells refrigerators, freezers, microwaves, washers, dryers and other appliances.
With 25 years of experience under his belt, Baney is excited to offer his services to the surrounding area and does not mind traveling to fix/install an appliance.
Baney is no stranger to the southwest corner of Nebraska. During his summers growing up, Baney would visit his grandma, Champion native Dorris Carpenter.
The house he and his wife Jennifer currently reside in is the very same house his father was raised in. The couple moved to Champion from Loveland, Colo.
“I like Champion. The traffic is small and there aren’t any stop lights or round-abouts,” said Baney.
Currently working out of a newly built shop by his house, Baney hopes to get a store front in Champion sooner rather than later.
“I want to keep the business in Champion, but I don’t mind traveling to the surrounding areas like Imperial, Wauneta, Holyoke, Lamar, etc,” said Baney.
Baney’s Appliance has various on-site appliances that are in top condition, but are discounted due to minor scratches or dents. He also has various parts available for the do-it-yourself people.